What do women tattoo most often? 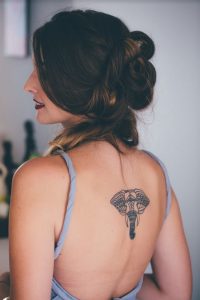 More and more women decide to get a tattoo. Their choice is most often quite delicate designs. Usually these are flowers, birds, plants, wild animals and various inscriptions. Every tattoo studioreceives hundreds of clients and female clients during the year. Artists employed in such places can then build a really extensive portfolio from which you can boldly choose various proposals. Not all women take advantage of this opportunity. Many of them prefer to edit the pattern on their own and give it a bit of an individual character. Nevertheless, the subject of the tattoo itself usually reflects the trends prevailing at the time. What tattoos were in fashion in 2018? Which themes are the most popular? What patterns are becoming kitsch over time? This is just one of the many questions that people who want to get their first tattoo ask.

Almost every tattoo studio implements several projects each year, where the main theme is roses, peonies or other flowers. Does this mean that the floral patterns are clichéd and unremarkable? Of course not! It all depends on how we choose to present a similar theme. It is worth remembering that the drawing should somehow reflect our character. It does not always have to express our views or commemorate some important events in our life, but it is best when its form is combined with our attitude towards life. So, if you are an optimistic person who smiles a lot and tries to bring positive energy into the lives of others, you should consider a pastel tinted tattoo.

In 2018, flower drawings resembling watercolors were very popular. The splash paint effect won the hearts of women all over the world. All because of the irresistible charm of this technique, its uniqueness and the fact that each project is different from each other. It is practically impossible for there to be two people in the world with an identical tattoo of this type.

Of course, this is not the only way to present flowers. Another fashionable solution is to combine black with one color. Violet, red and blue work best. This is a proposal for fans of realistic style. Such tattoos are most often chosen by women prone to romanticism.

The tattoo studio staff should assist clients. It is often the case that the final decision regarding the project is made a few moments before its implementation. For undecided ladies, drawings made only in black ink are recommended. Such tattoos practically never go out of fashion, and, contrary to appearances, flowers look great in black and white version.

Some patterns are fashionable only for a while, and then unfortunately become a kind of synonym for kitsch. Trying to guess what motives are doomed to fail in the future is quite difficult. Everything here depends on how society reacts to them. One thing is certain, if a pattern is massively tattooed and everyone dreams of decorating their body with it, it does not bode well for anything good.

A perfect example are the tribals that women tattooed just above their buttocks. This trend prevailed at the beginning of the 21st century. It persisted for several years, until it was finally hailed as the kitsch of the century. Many ladies today certainly regret the decision they made in their teenage years. Unfortunately, it is ink, not pencil, that is used to make a tattoo. So let’s think carefully about your choice.

Another example of passing fashion straight from a tattoo studio are bows. Women eagerly decorated the upper thighs with them. It was supposed to be sexy, and it was. Unfortunately – it is no longer considered such. It must be admitted, however, that nicely made bows still look more attractive than the previously mentioned tribals.

An interesting trend is that women tattoo images of wolves, foxes, bears and other wild animals. They seem a bit grotesque when combined with a tiny female body, but actually look great on it. At times, female nature is as unpredictable as these creatures. Such projects are usually implemented in accordance with the assumptions of realism, but the so-called dot-bag technique.

Remember that the effect we get after leaving the tattoo studio is supposed to remain on our body throughout our lives. Therefore, it is not worth succumbing to fashion, sometimes it is much better to tattoo something that has a personal meaning to us than what everyone likes at the moment. A tattoo does not always have to have a hidden message, but it should primarily appeal to the person wearing it. Hasty decisions on this topic can have a disastrous effect. Sometimes it is a good idea to ask a loved one for advice.